I was delighted to be off the train and in such a beautiful city. Our trip package sent us off the first day for a two-hour ride to Niagara Falls on a travel bus.

I wasn't sure I was going to like it, but our tour guide regaled us with stories of history, philosophy, geography and botany. I did not know Canada boasted so many wineries. We learned of ice-wine, which I did not even know existed. We stopped at a university which teaches wine-making and sampled wines. The ice-wine was delicious. I won't even go into the details of that here, but might include it in a different post. 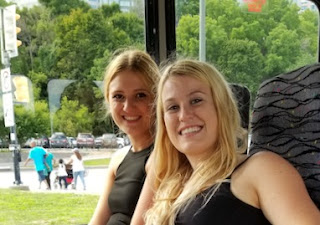 We met Christina and Birgit, two lovely young ladies from Germany, while on the tour bus. Of course, Darling mothered them during the trip, and they doted on her. Me? I got to wander around with three lovely women for the entire tour! 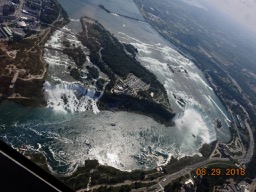 We took a helicopter ride over the Falls (wow, that was amazing), the boat ride to the Falls (wet, of course) and had a nice lunch on an open porch where we could enjoy the view of this grand spectacle of nature. 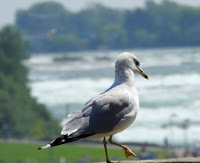 Darling took pictures of birds, especially one seagull who posed for her.

Then back to Toronto for one more day.

In the city, part of our package included the hop-on, hop-off tour bus. I saw the girls as we rode around the city, but they didn't see us. What are the odds? 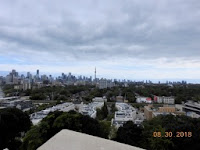 We went to Casa Loma, a castle in Toronto built on one of the hills. From the top of the castle you view the entire expanse of this great city.

At this point, the gleam of the tour package started to tarnish a bit. Our package included admission to the CN Tower, which we had neither the time nor inclination to visit. Too many things scheduled without much regard to a vacation pace, which should include downtime.

Still, all things considered, Toronto is a great town to visit. They even play music on the street.

Next time, we fly there.
Canada Semi-serious
Location: Toronto, ON, Canada