After the flight to Chicago, we arrived with a few hours to kill, though not enough to tour Chicago or even see some of the sights.

A cab ride later, we're at Chicago's train station, which is beautiful, and looks similar to the Grand Central Station in New York.

Amtrak provided a lounge, nice seats, snacks, televisions and a fairly quiet atmosphere. We didn't like the baggage storage area. Apparently you just drop your bag into the room and expect people to be honest.

We took our bags into the lounge with us, and we weren't the only ones to do so.

We met a woman traveling with her 83-year-old mother. They bought the 45-day Amtrak Rail Pass that allowed them to travel trains anywhere in the USA, as long as they didn't exceed 18 off-on segments. They were heading home - to Houston  (you CAN catch the train there) - and had seen the west coast, the east coast, the northern border and the southwest area of the country. When they got tired of train travel, they jumped off for a few days and enjoyed a new city, then jumped back on when they were ready.

We were more excited than ever to hear first-hand accounts of good train travel.

About eleven pm we boarded the train into our overnight coach car. We had a butler.

Okay, he wasn't a butler, but he brought us something to eat and drink and then turned our beds down for us.

Though the room was smaller than we expected, our exhaustion let us collapse into our bunks and doze off.

A toss and turn night ensued, but we figured we'd get used to it over the next few weeks.

After arrival in Pittsburgh, we changed trains and traveled coach to New York. Honestly, I don't recall much of that part of the trip. We ate hot dogs and sandwiches and chips and drinks from the food car. The seats were comfortable but unremarkable. Watching the landscape sweep past us with neither of us driving felt like a novel experience.

People on the internet sites are right. You need to take something to do when you take a train. Liz gave us crosswords... 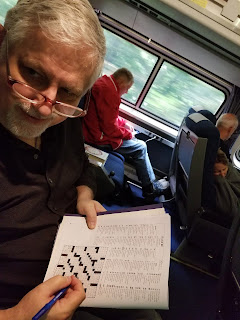 And then we arrived in New York, The Big Apple. The crown jewel of the east coast.

Okay, I made that last one up.

Thanks for reading.
Semi-serious USA 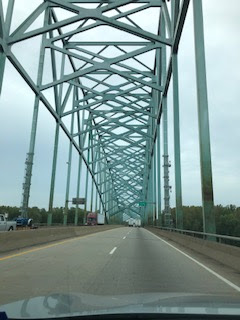