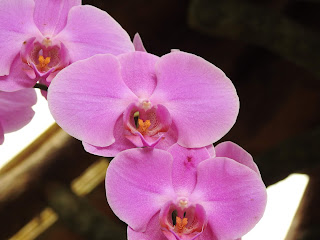 I skipped a day. You want to know why?
Because I felt, as Bill Cosby joked once, like my bottom lip was in my lap.
Let's look at the working schedule, mostly so I don't forget it, but also so you can decide if you can handle this sort of routine.
We flew into San Jose on Tuesday night and we got to the Apartotel la Sabana hotel around 10pm. We were tired and crashed.
The hotel has a very nice breakfast buffet, so we eat our most important meal by the pool every day.
The next morning, Wednesday, we walked from here to Dr. Kriebel's office for a 9AM appointment. Darling saw him first and I followed. He took x-rays and developed treatment plans which were much less extensive than the plans of a hometown dentist we visited (and the one who prompted this wild escapade).
We had lasagna for lunch (very expensive) and Subway(TM) for dinner. We each saved half a Subway(TM) sandwich.
Thursday was 1:30PM. We hung around the hotel room and eventually ate the sandwiches, then hopped over to the dentist. He worked on Darling's mouth for about two and a half hours.
Suck it up, Buttercup! That's two and a half HOURS in a dentist chair.
In the USA we're used to having the dentist pat-pat-pat around and stuff cotton gauze into our mouths and touch us with that gentle, feathery touch we reserve for priceless treasures. The Doc dove in and did what he had to do. Oh, he used numbing agents, but not cotton balls. Darling was a bit overwhelmed.
I followed her into a chair and the Doc drilled and filled a very large cavity in my upper left jaw, then a few lesions (ditching) on the upper left side.
That guy is fast. I mean, fast. And good. The tooth (or gum) is still sore today, but I think that's just the work he did and time will take care of it.
Friday (yesterday) we went to the dentist at 1PM and I was back into the chair. The Doc went right to work and numbed and corrected lesions on the lower left of my jaw. After five minutes of rest, he did my upper right side. Five more minutes of rest and he completed the work on all my major lesions by working on my lower right jaw.
That's why my numb lower lip felt like it was in my lap last night.
We stopped to eat at a chicken place and I decided to take it "to-go" after I dribbled Coca-cola down my chin and onto the table. Not to mention I couldn't tell I had corn stuck between my lower lip and gums. And Darling just sat across from me and sympathetically laughed at it all.
I finally managed to eat the dinner at about seven in the evening. It was pretty good.
So far, that's the saga. We don't have another appointment until 3PM on Tuesday, when Dr. Kriebel puts Darling's crowns in and we're good to go, two days ahead of schedule.
Today, a nice young man named Jorge drove us to the La Paz Waterfall Garden and Darling took a few hundred pictures of waterfalls, landscapes, wildlife and flowers. Snapshots of Costa Rica, coming up, and more later.
Thanks for reading.
PS - Though I write a (numb) tongue-in-cheek review-Would I come here again for dental work? Yes. Absolutely.
Costa Rica