Showing posts from November, 2018
Show all

I'm not sure New York is my kind of town, but this was my first visit to the Big Apple.  I'm also not sure why they call it the Big Apple. Amtrak Vacations booked us into The Stewart Hotel, just a few blocks from the Empire State Building. They booked us on the 20th floor. The elevator only went to 19. What? The porter helped us to a small staircase to get to that one extra floor. We were tired, so we went back to the desk and the kindly staff put us in a room on a floor with an elevator.  Empire State Bldg Tired as we were, we had to see the Empire State Building. Folks, this is the big city, and everything costs money. Lines of people from all over the world snaked through the building to the elevator which rose to the top of the tower. A long line of people waited for the elevator going back down. We spent the time speaking to people from other countries, which was fun. The view from the top of the Empire State Building gives you a bird's eye perspective of the great ci
Post a Comment
Read more

I'm not sure Travel Insurance is a good investment in your travels. We bought the Travel Insurance from Amtrak Vacations, at their strong urging, and thought it a good idea in case something happened and our trip had complications. Every trip has complications, some more serious than others. The bottom line on this one is buyer-beware. We canceled some events on our itinerary due to illness and still have not resolved the issue with Amtrak Vacations or Trip Mate. Each tells us to call the other. I suspect we shall never find a resolution that involves any kind of refund. Amtrak Vacations does not provide a detailed billing, either. I confess to great naivete when we worked with them to plan this trip. Never again will I deal with their company, nor will any of my loved ones. They planned extensive in-city tours and we only used part of them. Most of the time we were too rushed to see the things we paid to see, and they weren't things we would have chosen had we thought about it
2 comments
Read more 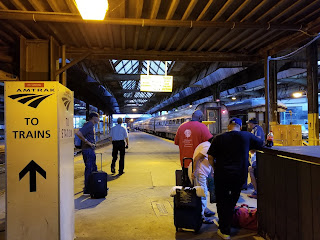 <<Internet guy worked for over six hours on our line today. Sorry for the late post.>> After the flight to Chicago, we arrived with a few hours to kill, though not enough to tour Chicago or even see some of the sights. A cab ride later, we're at Chicago's train station, which is beautiful, and looks similar to the Grand Central Station in New York. Almost All Aboard Amtrak provided a lounge, nice seats, snacks, televisions and a fairly quiet atmosphere. We didn't like the baggage storage area. Apparently you just drop your bag into the room and expect people to be honest. We took our bags into the lounge with us, and we weren't the only ones to do so. We met a woman traveling with her 83-year-old mother. They bought the 45-day Amtrak Rail Pass that allowed them to travel trains anywhere in the USA, as long as they didn't exceed 18 off-on segments. They were heading home - to Houston  (you CAN catch the train there) - and had seen the west coast, the east
Post a Comment
Read more 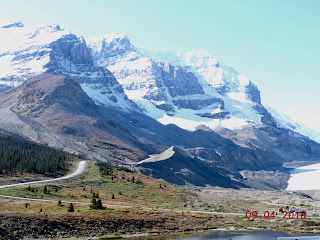 Darling and I discussed the key items for traveling. Everyone says "snacks" and I'm good with that, but don't forget these necessities. We were on the icy slopes of a glacier between Jasper and Banff and she didn't have her sunglasses. She was almost blind. Remember your sunglasses, sunscreen and hat. They are essential to comfortable travel, whether to the frozen north or the sunny south. If you have a nice camera, make sure it has a hat, too. Darling's fabulous camera couldn't compensate for the bright glare from the glacier, but would have handled it fine with the correct attachment to shade her lens. The Nikon COOLPIX P900 is a great camera , but glare is glare. Avoid glare. Remember your sunglasses. Of course, you need to take snacks and drinks (not past TSA). Take a knit cap  or earmuffs  for the north. I always take a scarf, because I can roll it up for a neck pillow or use it to stay a little warmer or cover my face like a bandit to rob banks. Just
Post a Comment
Read more

Apparently, any train trip from Houston starts with a plane. Ours did. We flew from Houston's Hobby Airport (HOU) to Chicago O'Hare (ORD) on American Airlines. We changed planes in Dallas, of course. I have a horror story about changing planes, but that's a different trip. A basic rule of travel is to take snacks with you. I see young travelers with trail mix or fruit and nuts. For goodness sake! You're on a trip. You WILL eat badly. Take candy bars. We travel light and carry our bags on the plane. For a nineteen day trip, we each had one suitcase and a shoulder bag. Yeah, we're awesome packers. We still packed too much. Due to TSA rules for liquids, we now use   clear toiletry bags . No more rummaging for something. We just turn the bag and look. Fabulous. I checked in for our flight the night before. While I did this, the web site told me to pick my seats, and I wanted Darling and I to sit together. Those cost me extra money, about $38 a seat. What? Am I buying t
2 comments
Read more

I collect luggage. I don't mean to, but over the years I managed to buy a new suitcase or travel bag for every third trip. When I was a younger man with a strong back, I bought the ones that converted to backpacks. I still have my favorite one. It weighs quite a bit because of the built-in frame. Oh, and you have to carry it. 😃 Rick Steves has a good bag. I have two of those, one dark blue and one black. To match my travelling shoes, I suppose. My back can't handle those bags any more, so I decided to grab a new suitcase. I wanted wheels - the spinner ones that let the bag walk next to you, like a well-trained dog. I wanted luggage that had hard sides this time, but it also had to be sized as a carry-on.  We don't check bags when we travel. The search began.  I agonized over which bag to buy.  Some are beautiful and look rugged and manly. Except for the wheels. And the handle. I could have spent hundreds, but in my experience of on-line shopping, p rice rarely indicates qu
1 comment
Read more

A Memory of Panama City 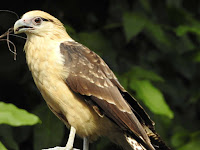 Facebook reminded Darling that two years ago we were in Panama City, Panama. Yo will find a description of the trip under "disaster" in the dictionary. Really, I planned the worst trip ever. The best part was this picture of a Yellow-headed CaraCara that Darling took on our first morning there. I'll cover more of that trip. There are too many travel tips not to do so.
Post a Comment
Read more
More posts