- December 31, 2019
Until the moment we arrived at his house my brother wasn't sure we were really moving to Michigan.

We expected our furniture on November 25th. Darling finally got someone on the phone on Wednesday the 27th and they confirmed our shipment was in a warehouse in Dallas, TX.

A lot of good that did us. We bought a couch and love seat and an air mattress and moved into the house anyway. After all, we wanted to be in the house we bought.

The house is more lovely than the photos. The view of the natural lake out our huge living room window is fabulous, unobstructed by the leaves that will cover the trees in the spring.

Still, it's culture shock for us both. I've lived my entire adult life in the Houston area and Darling is a native Houstonian, subjected to cold and snow only on trips.

I bought a snow blower and yard tools. My brother, Northern Viking that he is, came over and uncovered our yard from the piles and piles of leaves littering the ground. 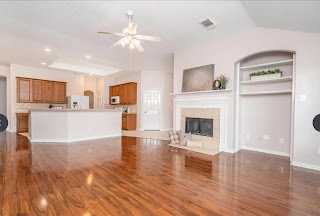 Two weeks! What in the world is happening to us?

The moving guys came the second day and moved everything out. They had to take it all to Dallas, Texas. What? That is some poor planning, done, once again, by our moving broker.

The fine print of the contract warns me of a dozen things that can add cost to the final delivery. They certainly did that.

So what came next? Tuesday, all our worldly goods, except what we crammed into our car, disappeared and are now at the whim of a moving company with whom we have no experience.

Wednesday we did cleaning of our Texas home and it now shines. You can see it here. The house is so pretty now, I'm wondering why we left!
Thursday morning, the 21st of November, 2019, we tossed the cats into the car, squeezed ourselves in and took off for Michigan and our new house.

If I'd known we were moving, I would have waited to get the new car.

The original plan was to drive straight through, switching drivers as needed. We drove from local clouds in H…
Post a Comment
Read more

But this sure is not pleasant.

We arranged our move through a broker. They seemed kind and concerned with our welfare.

That should have been my tip-off.

The first estimate was around five grand. That required a non refundable deposit. A week before the move, during a phone interview with Darling, they raised the amount to over eleven grand. Another deposit.

The brokers arranged for “local” movers. They came from Dallas, four hours away.

These movers did a walk through and now estimate almost fifteen grand.

The broker, when contacted, was rude and unconcerned. Should we cancel now, of course, we lose the five grand we deposited.

They loaded the truck that the broker KNEW would not be sufficient and drove away yesterday, planning to return today for the remainder.

I hope their truck is big enough this time.

I hope they don’t change their estimate again, now that they have half our things. In Dallas.

I have a record for my mother's sister, Anita, from US Gen Web Archives showing her birth in Bexar County (San Antonio).
STONE  ANITA  JOYCE 1-15-1936  f  BEXAR  ELVA GERTRUDE ELSTON  EARL BERNARD STONESadly, familial ties do not make one a Texan. You must be born in this great state to make that claim.

Darling has traveled a bit, yet she has never lived elsewhere. She's being brave.

And though I feel I am finally returning home (Michigan is home to many of my maternal relatives), I also will miss Texas.

For Texas has been the only adult home I've known.

I'll miss many of the people. I'll even miss the attitude of the typical Texan. I'll miss Tex-Mex food. I'll miss Buc-ee's.

I can admit that every time we moved as children, from state to state, I cried a bit. One most notable time was when we left Rhode Island in the middle of my school year, leaving behind friendships I nurtured for three years (a record for me). It was winter, th…
Post a Comment
Read more

As a career Navy man, we moved, on average, every two years of my growing up life, until I entered 11th grade and we finally settled down in Rockford, Michigan.

Of course, that meant that a few years later I embarked on my own adventures.

I have lived in a relatively small area of the country for the last forty years, but we're moving to Michigan now.

As an adult, I have never had to deal with a move of this magnitude.

Moving to Houston in 1980 was easy. I packed everything I owned in a bag and jumped on a bus.

Two divorces, three marriages and forty years of accumulation later, Darling and I are packing to move to Cedar Springs. We're two weeks away from being in our new location.

We're excited. We're nervous. It's all a little scary.

Will the moving company hijack everything we own and hold it for ransom? Those horror stories are all over the internet. I hope they don't do that; our moving broker took a lot of money to make sure that does…
Post a Comment
Read more 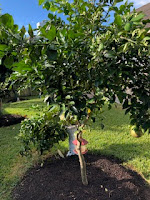 When we first moved into our current house, Darling and I planted a number of citrus trees.

One grapefruit tree died and we replaced it. Nothing there yet.

Another struggled for years. THIS year, the year we leave, it produced a healthy harvest. Great timing, little guy.


Our orange tree provided some fruit for the last couple years and has more this year.

We had a wonderful little tangerine tree that yielded delicious fruit two years ago. Our lawn guys killed it by girdling the trunk with their weed eaters. Thanks guys. We replaced it and the new tree has some tangerines this year.

We have another grapefruit tree that is mostly leaves and a Loquat tree that gives nice fruit every spring. I'm not fond of loquats, but Darling likes them.

I'm going to miss those trees. 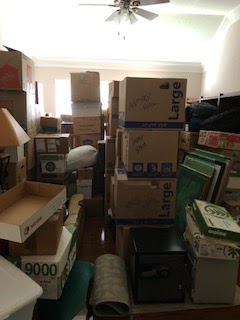 Yeah, preparing to move is awful.

It's the sorting that gets to you, but after a few weeks of sorting and boxing...

...you just move to boxing.

Pack anything not nailed down.